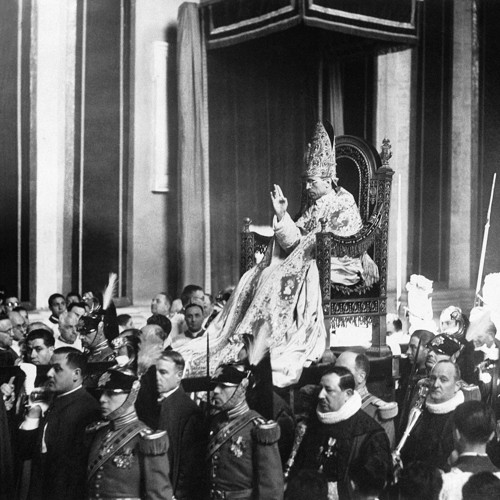 
The changes must go deep down because anti-Semitism lies at the very roots of Christianity. What, then, should the church do, and how must it change? For starters, the church should halt immediately the canonization of any person -- read Pius XII specifically -- who aided and abetted the persecution of Jews. In addition, the church must recognize that anti-Semitism has been inseparable from its authoritarian and imperialistic pretensions and must abandon papal infallibility, dissolve the Vatican as a political state, embrace religious pluralism to make clear that salvation does not come through the church alone and revise its official catechism to make unmistakable that any teaching smacking of anti-Semitism is "wrong, null and void.

Love your neighbor. Seek peace. Help those in need. Sympathize with and raise up the oppressed. Do to others as you would have them do to you. The "Bible problem," moreover, is not just that two apparently contradictory perspectives collide but that the collision takes place in texts that are regarded as sacred and divinely inspired. The need, Goldhagen contends, is for Christians to rewrite the New Testament, to expunge anti-Semitism from it, but he recognizes how difficult, perhaps insurmountable, that task may be.

Nevertheless, Goldhagen does not despair. He thinks that the Christian tradition can be self-corrective, resilient and revitalized if Christians find the will to be true to their tradition's best teachings about love and justice. Goldhagen does not presume to rewrite the New Testament.

Pius XII and the Holocaust A Reader

Nor does he venture to define everything that a truly post-Holocaust church should be. His book contains touches of modesty after all. Meanwhile, if the Roman Catholic Church, and by implication all churches, moved in his direction, it would not be the first time that a Jewish teacher has shown Christians the way. Goldhagen seems to be betting that Christianity can gain new life by letting its old one die. How many Christians will welcome such prospects remains unknown, but such hope should be familiar to them. It would be good for post-Holocaust followers of Jesus to embrace it.

Daniel Jonah Goldhagen. New York : Alfred A. Knopf, In this polemical study, Goldhagen asks the Catholic Church a question: "What must a religion of love and goodness do to confront its history of hatred and harm, to make amends with its victims, and to right itself so that it is no longer the source of hatred and harm that, whatever its past, it would no longer endorse? His review of the literature and his selective use of data provide the underpinnings for his critical, moral treatise. Additionally, on p. He does not give, of course, the authors that he cites a chance to respond to his alternative interpretations of their data.

He uses this "proof-text" methodology selectively to support the thematic issues that he wishes to develop and not necessarily to illuminate the historical realities, e. Goldhagen divides his book into three parts, each corresponding to what he labels "moral reckoning": moral investigation, moral judgement and moral repair. Here Goldhagen contrasts the perspectives as well as the actions of the leaders of the Catholic Church with similar stances prominent in the Protestant churches in Denmark and Norway.

Not surprisingly, the Catholic Church fails the comparative test. Part Three, rooted in the factual bases and moral culpability model of Parts One and Two questions how the Church is to make amends. Following an introduction that sets the tone of the book, Goldhagen launches Part One by explicating a fairly standard theme.

Christian churches helped develop an antisemitic bias that was dedicated to the conversion of the Jews, while simultaneously trying to "eliminate" Jews from their so-called influential roles in civic society and culture. The churches did not support the extermination of the Jewish people. Goldhagen and other scholars generally have pointed, however, to the fact that religious, cultural and political antisemitism softened the consciences of Christians and so allowed the virulent, exterminationist antisemitism of Hitler and his minions to spiral out of control into the brutalizing death camps.

Like a growing list of other scholars, e. Throughout his book, Goldhagen peppers his analysis with the moral precepts articulated by the Catholic Catechism to judge the activities of Catholics and their Church during this dark period, and he is right to do so, except that this complex story, about which volumes of commentaries have been written, cannot be tied merely to non-nuanced moral axioms.

Morality is more complicated than simple axioms might suggest.

To comprehend their meaning properly, one must understand these stark moral axioms within their evolving contexts in secular and theological history. What particularly seems to disturb him is the fact that the Catholic Church during this period was acting as a political institution as well as a moral institution and not exclusively as one or the other p. Since the inception of Christianity, and especially after Constantine, however, the Church has had to function as an institution that lives in the world and yet has a spiritual mission.

What this has meant in practice is that Church Councils, Popes, and documents have articulated theological and moral principles, but have done so only while engaging the culture. Hence, moral principles have tried to exert guidance in the real world of marching soldiers and have at times failed. Goldhagen seems to find it difficult to accept that human activity by its very nature is political and moral, which means that each of us has to live in a dynamic tension of balancing "real world" survival and the ethical principles that we use as guiding principles.

The fact that bishops, theologians, and lay Catholics were antisemitic should not be as surprising as Goldhagen suggests, since the bias has been carefully learned over the centuries and this systematic evil sin is part of our learned culture. Adolf Cardinal Bertram and Karl Adam, a leading Catholic theologian, for example, feared the influence that Jews had within German culture. Their statements appall Goldhagen and, indeed, most of us. But, on the other hand, he fails to give praiseworthy statements their due.

He engages in this type of selective scholarship too frequently. Goldhagen tends to be repetitious and combative, and frequently misunderstands the theological issues involved in such recent declarations as Dominus Jesus , which he cites as an example of the ongoing hostility of the Church toward "the other.

Read in isolation from its context, Dominus Jesus , for example, is a very distressing document. Only the context allows the declaration to be understood as having a disciplinary intent, with which we may not agree, but at least can accept as the agenda that is being addressed.

The Vortex—Trump and the Vatican

The fact that so much ink has been spilled over this particular declaration, of course, suggests that the Catholic faithful have found its message difficult to accept, a positive sign for many. Most of those interested in Jewish-Christian relations would agree that the Church has been moving forward ecumenically since Nostra Aetate and is conscious of its horrendous past errors. Johannes Metz sums up the post-Vatican II approach that can best be applied, when he insists that theology has to be done in the light of events.

But he sees this reality as insufficient.

Naturally, more progress has to be made, since two millennia devoted to the marginalization of the Jewish people lays on Catholics a responsibility that cannot easily be lightened. Here, he goes beyond the position of even James Carroll who wants to retain Scriptural antisemitic statements in order to demonstrate how its own beliefs can corrupt an institution. In contrast, Goldhagen urges the Church to call for a public convocation of all the Christian churches to address the antisemitism contained in the Christian Scriptures.

He also appropriately envisions Jews having a voice in the conversation, but not having a vote. Goldhagen insists that the result of such a convocation should be the excision of antisemitism from the Christian scriptural texts. These sacred texts are part of the living tradition in the Catholic community, but should probably be primarily used to discern the positive as well as the negative dynamics involved in forming a communal identity. After all, even in most of our own personal lives, such dynamics undergird our behavior.

There is, however, a caveat to be kept in mind. Perhaps this book will stimulate Christians to bore more assiduously and critically into Christian history and into the ecclesial as well as into the theological pronouncements that have emerged from that nexus of politics and morality that makes Christianity itself a fascinating, spiritual story. Whether an individual reader will profit from plowing through the book depends on their prior knowledge.


This will determine how well the reader will discern where Goldhagen engages in polemicizing, proof-texting, selectivity and reductionism, and where he raises good questions. His own answer is clear: Jesus preached a faith of goodness and tolerance, and would have openly condemned the persecution of the Jews. The whole thrust of the argument of this book is to expose Christianity as a humbug. On the one hand a religion of love and brotherhood, on the other a political institution willing to turn a blind eye to mass murder when it suited it. Goldhagen swept to prominence eight years ago with his book on Germans and the Holocaust in which he argued that German popular culture contained a powerful "eliminationist" anti-Semitism that explained the Germans' willing destruction of the Jews.


Now he has turned the spotlight on the Catholic Church in Europe he is surprisingly silent about Catholicism in America and Britain. He has discovered - not that it was ever a secret - that for almost two millennia the Catholic Church has been hostile to Judaism and the Jews, that Catholicism includes hostility to the Jews in its theology, and that during the German reign of anti-Jewish terror the Catholic Church, Papacy, bishops and much of the clergy either ignored, applauded or in some cases abetted the Nazis.

There is nothing new about this as history, which has been known for years.